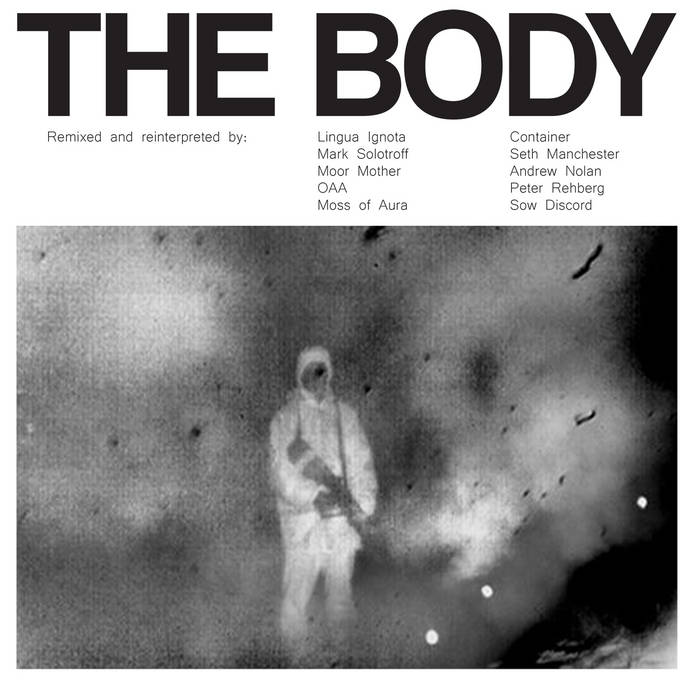 The Body was founded by drummer Lee Buford and guitarist/vocalist Chip King in Fayetteville, AR in 1999. Eventually, the two would move to Boston and Philadelphia respectively before relocating to Providence and releasing their first album in 2004. Buford and King took up their now-residence of Portland, OR in 2012, and have been consistently releasing the most forward-thinking work in heavy music, both on their own and in collaboration with likeminded artists like Thou, Full of Hell, Uniform, The Haxan Cloak, The Assembly of Light Choir, Krieg, Braveyoung, Vampillia, and more. Emblematic of their love for the collaborative process, The Body chose to celebrate their 20th anniversary with a special limited double LP of remixes from their previous albums, simply titled Remixed, and including a deluxe poster cataloguing the nearly 100 shirts the band have printed in their career. The artists selected to for the remixes include longtime friends, artists who The Body have influenced or been influenced by, and artists with whom the band share a mutual respect.

Remixes by Moss of Aura (Future Island’s Gerrit Welmers) and Peter Rehberg (KTL, Pita) stand as a testament to The Body’s reputation as innovators across genres. It comes as no surprise that The Body would include remixes by friends from around the globe whom they’ve toured with like sometimes live The Body member OAA, Whitehorse’s Dave Coen (Sow Discord), and Andrew Nolan (Intensive Care). Buford explains how humbled they were to include tracks reworked by Mark Solotroff (Anatomy of Habit, Bloodyminded), and Moor Mother (featuring :3LON): “Mark is a legend and has been a longtime friend. He’s a total anomaly because he’s been doing this for decades and still is extremely enthusiastic about music. We’re huge fans of Moor Mother, and she’s making some of the most original music nowadays. She’s like us in that she has all these disparate influences in her music, but she pulls it off so seamlessly.”

The presence of Providence’s prolific and diverse underground music scene has remained prevalent throughout The Body’s work. Says Buford, “I stand by my assertion that Providence and Providence-related music is the best.” The duo continues to record the bulk of their releases at Providence’s Machine With Magnets with engineer Seth Manchester, whose “Western Dub” remix reflects the band’s varied taste. “Seth is too humble for his own good. He's a true genius and the best person,” Buford goes on. “It's like a vacation recording with him.” The innovative work of Providence affiliates Container and Lingua Ignota run parallel to The Body’s, pulling threads from noise, classical, dance music, and more into their virtuosic amalgamations. “Ren [Schofield of Container] is a longtime Providence head just like us. We met Kristin [Hayter of Lingua Ignota] when we went back to Providence to record and play a show there. She’s a true legend. We became friends immediately, and have become best friends since then. It's always great to make music with her.”

Bandcamp Daily  your guide to the world of Bandcamp

Featured sounds from Fly Lo and Ahmed Idris, plus Mother Nature hops on to drop off new project